“Multiculturalism is more than giving children the opportunity to learn Ukrainian or Yiddish or Finnish or Vietnamese. It means to make them into secure citizens, knowing that the traditions of everyone, including their own, are to be respected and cherished; that Canada is a nation that accords dignity to everyone, rather than suppressing people’s identities and thereby detracting from their full sense of humanity.”

“As we encounter each other, we see our diversity – of background, race, ethnicity, belief – and how we handle that diversity will have much to say about whether we will in the end be able to rise successfully to the great challenges we face today.”

– Dan Smith, The State of the World Atlas

“Cities are a sum of its people. Multiculturalism strengthens the sum.”

Multiculturalism in Canada, Australia, and the United Kingdom: 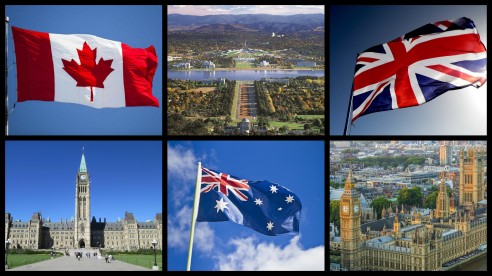 Canada, Australia and the UK have adopted official policies on multiculturalism which have opened the doors for many people who want to migrate to these countries to do so. As mentioned above, multiculturalism was implemented through policy in Canada in 1971 and successfully affected all aspects of the country. One example of this is the 1991 Broadcasting act, that states that Canadian broadcasting should be diverse and reflect the different cultures in the country.  Australia was the second country after Canada in 1972, to adopt into law the concept of multiculturalism. One example of how Australia successfully implemented this was through the creation of the Special Broadcasting Service, in which its mandate states it will “provide multilingual and multicultural radio and television services that inform, educate and entertain all Australians and, in doing so, reflect Australia’s multicultural society.” (SBS FAQs)

Multiculturalism was introduced and made into law in the UK in the 1970 and 1980s. One example of how the UK opportunely inserted multiculturalism is that in 1997 the New Labour government committed to doing things on a national level, that used a multiculturalist approach. Though policies and attitudes in certain nations are gradually changing towards multiculturalism, in part due to the current refugee crisis’ and unrest in various countries which force their citizens to leave. Countries like Britain are re-evaluating their stance on multiculturalism. Current global trends in migration, and most notably the terrorist crisis, are forcing most countries with multiculturalism to rethink their policies about the concept.

3 thoughts on “Multiculturalism: A Primer”