Not long ago a story went viral about a little girl named Sophia, who went to Target with her mom to pick out a prize for learning to potty. She picked out a doll who was a doctor. The girl was white, and the doll was black. The cashier asked the little girl if she wanted to pick out a different doll because that doll didn’t look like her. But the little girl said, “Yes, she does. She’s a doctor like I’m a doctor. And I’m a pretty girl and she’s a pretty girl. See her pretty hair? And see her stethoscope?”

The USA Today article I used to get the exact wording said this, “This account of a ‘color blind’ [sic] kid reminds us of Lydia Rosebush’s son, [Jax] who in February wanted to shave his head to look like his African American friend [Reddy].” (You may have seen that story too.) Both moms who shared these interactions had similar takeaways:

My first reaction to both of these stories was to be all heart-melty and happy. But within a minute or so, I sort of got uneasy. The beauty of these stories is that these kids aren’t seeing skin color as something that determines a substantive difference or decreased value to a person. That’s wonderful and beautiful and a good lesson for them at their ages and level of understanding. But the problem is that we, as adults, act as if these stories reveal to us that color blindness is the way forward. We praise them as if they are the pinnacle of racial understanding. But it just doesn’t work that way. Because while Sophia’s mom is half-right and every shade of skin really is beautiful, in our world, color does matter.

In short, the heartbreaking reality is that Reddy will have a different experience of life than Jax will. I like to assume that all of our readers are “woke,” aware that both systemic racism and white privilege are very real. But, if I’m wrong, or if y’all just need a refresher, here are some basics:

(Sources for these stats can be found here and here.) 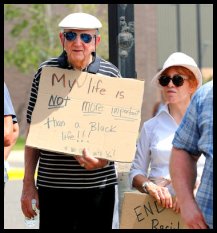 To further illustrate the issue, I want to point to an excellent piece I found while researching for this post. Bitsy Bentley wrote this incredibly honest account of her experiences in owning up to her own internal racism, which by the way, we all have. I encourage you read the whole thing here, A White Woman Confronts Her Racism, but I think this excerpt gets to the heart of the matter:  “Unconscious bias turns our streets into a dangerous place for black and brown people in our communities, and conflating order with safety is part of the problem. I’d like to see white people change the way we talk about policing in our communities — we need to put safety ahead of order and hold our elected officials accountable for recognizing and dismantling the systemic bias that holds black people in fear.”

Pursuing color blindness, ignoring racial realities, and refusing to stand up against racial injustices and oppression quite literally undermines the safety and wellbeing of people of color in our communities. We all have biases that we must proactively fight, and pretending they don’t exist won’t solve anything.

So, what do we do about it?

I will add a few “how to be an ally” articles to the For More Information… section of the post. But I want to focus our attention on the next generation, on the Sophias and Jaxes of the world. I wrote this particular post this week because of a conversation I had on Saturday. I was with a good friend I hadn’t seen for

ages, and we were talking about Tuesday Justice, and she told me about some of the discussions she’s had with her husband about how they will talk to their son about race. He’s only 9 months now, but it won’t be long until he, like Jax and Sophia, begins to interact with the world around him. As his parents, they want him to respect and value people of all races equally, but they also want him to understand the responsibility that comes with his privilege.

I’m not sure I would’ve known where to begin without this article by Ali Michael and Eleonora Bartoli, What White Children Need to Know About Race. Again, I encourage you to read the whole thing, but here is the most relevant part:

“In particular, the research suggests that for fear of perpetuating racial misunderstandings, being seen as a racist, making children feel badly, or simply not knowing what to say, many white parents tend to believe that there is never a right time to initiate a conversation about race. They talk to their children about race if it becomes relevant in their lives (mostly in negative contexts). Otherwise, they tell their children that people are all the same and that they should not see race. 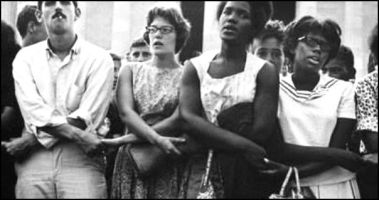 “While white parents’ intention is to convey to their children the belief that race shouldn’t matter, the message their children receive is that race, in fact, doesn’t matter. The intent and aim are noble, but in order for race not to matter in the long run, we have to acknowledge that, currently, it does matter a great deal. If white parents want their children to contribute to what researchers Matthew Desmond and Mustafa Emirbayer describe as a ‘racially just America’ in which race does not unjustly influence one’s life opportunities, their children will need to learn awareness and skills that they cannot acquire through silence and omission.”

The authors go on to provide a list of content knowledge and skills that we need to develop and help our children to develop as we move forward.

“One-dimensional, generic teachings are tempting. They feel easier and safer. […] But raising children who are resilient for justice and able to do their part to create an inclusive society takes more, especially now. And it’s not as hard as it might seem.”

from Are We Raising Racists? By Jennifer Harvey

While we should absolutely teach children that no skin color is more valuable, that our commonalities are greater than our melanin, that we are all in this together, we mustn’t ignore the very real differences in our experiences. For the sake of future generations, we cannot sweep racial disparities under the rug by pretending we “don’t see color.” Yes, it’s complicated, but for the sake of racial reconciliation and justice, it’s worth it.

7 thoughts on “Racism in America & The Danger of Color Blindness”