“Failing to see race is a failure to see history and how it shapes the present.” – Vicky Mochama

With the Liberal Party in power in Canada and more people of colour (POC) holding Member of Parliament (MP) positions in Canada, the government, with Justin Trudeau as the Prime Minister, started to make positive steps towards healthy representation in government in 2015. In doing so, the government is attempting to showcase to both the country and the world the diversity within Canada and to create a government that reflects the various cultures of this country. Just like in 2015, I believe the current political climate in Canada right now is one of wanting change. However, one thing that has changed and is slowly improving, in the political world at least, is an increased reflection of people of colour and diversity.

Not only are these MPs doing great things for their ridings, they are also are leaving their marks across the country. One MP in particular who has made a big splash since she was elected to represent the Town of Whitby is Celina Caesar-Chavannes. Cesar-Chevannes is a Black woman who has garnered support and attention in recent weeks, following a Twitter spat with white male Conservative MP Maxime Bernier over “colourblindness.” This term is often used when talking about race and racism and is at the crux of a very public debate between Caesar-Chavannes and Bernier. (Michelle has previously written about the danger of colourblindness in a personal context.)

It all started on March 2nd when the Somalian-born Honourable Minister of Immigration, Refugees and Citizenship for the Government of Canada, Ahmed Hussen, tweeted that the government had set aside $19 million for Black youth mental health programs, something that the Black community across Canada has long been advocating for. While this was seen as a success by many, the announcement by Hussen was also put under scrutiny by many others, who questioned why money had to go towards a certain group of people. One of these critics was the aforementioned Bernier, who tweeted: “I thought the ultimate goal of fighting discrimination was to create a colour-blind society where everyone is treated the same. Not to set some Canadians apart as being “racialized.” What’s the purpose of this awful jargon? To create more division for the Liberals to exploit?”

Retweeted 1.2k times and liked by 2.2k users, Bernier’s tweet obviously struck a chord with many, who most likely agreed with what he said, and who ostensibly don’t understand the need for putting money into groups who have been marginalized for centuries. Caesar-Chavannes then replied to Bernier’s tweet: “@MaximeBernier do some research, or a Google search, as to why stating colour blindness as a defence actually contributes to racism. Please check your privilege and be quiet. Since our gvt’t like research, here is some evidence…” And after that, Canadians were in a frenzy, on both sides. Those who sided with Bernier said of the Liberal MP (Caesar-Chavannes), “How could she, a Member of Parliament, be talking about ‘white privilege’ when she herself is in a position of privilege?” Others were glad she called out yet another example of white privilege.

After many comments and commentaries written about this situation, Celina publicly apologized to Bernier: “@MaximeBernier I am not too big to admit when I am wrong. Limiting discussion on this important issue by telling you to be quiet was not cool. If you are willing, let’s chat when back in Ottawa. We are miles apart on this important issue and it is possible to come a little closer…”. 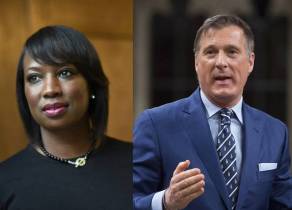 However, the Conservative MP was less than forgiving in his response: “Thank you for recognizing my right to air an opinion. I don’t think we can find much common ground beyond that however. You and Min Hussen implied I’m a racist because I want to live in a society where everyone is treated equally and not defined by their race. We should certainly do everything possible to redress injustices and give everyone equal opportunities to flourish. And we should recognize that Canada is big enough to contain many identities. As a francophone Quebecer, I can understand this. But that doesn’t mean the gov’t officially defining us on the basis of “intersectional race, gender and sexual identities” and granting different rights and privileges accordingly. This only creates more division and injustice and will balkanise our society.”

The backlash that Caesar-Chavannes received for her comment was, in my opinion, unfair and uninformed and really took away from the issue at hand: addressing “white privilege” and the racism that is so prevalent in Canadian society. What was so evident to me in this “dialogue” between two opposing party members, by a Liberal and a Conservative, by a Black woman and a white man, was that the Black “voice” continues to be silenced, when the truth needs to be heard. Colourblind ideologies in politics are ultimately unhelpful and lend themselves toward racism rather than away from it. Dr. Monnica T. Williams put it this way:

“Racism? Strong words, yes, but let’s look the issue straight in its partially unseeing eye. In a colorblind society, White people, who are unlikely to experience disadvantages due to race, can effectively ignore racism in American [or Canadian] life, justify the current social order, and feel more comfortable with their relatively privileged standing in society (Fryberg, 2010). Most minorities, however, who regularly encounter difficulties due to race, experience colorblind ideologies quite differently. Colorblindness creates a society that denies their negative racial experiences, rejects their cultural heritage, and invalidates their unique perspectives.“ [Emphasis added.]

The $19 million that the government has allocated to Black youth and mental health will be spent over five years to research “culturally-appropriate mental health programs for black youth at risk.” Though the government has not decided yet, exactly how the money will be spent , according to MP and chair of the Canadian Caucus of Black Parliamentarians, Greg Fergus, “the $19 million will […] be tailored to meet diverse needs.” Mental health experts across Canada have commented that the funding will help to improve access to treatment for a large section of the population who has been and continues to be marginalized. Bernier said himself that “We should certainly do everything possible to redress injustices and give everyone equal opportunities to flourish.” We cannot do this while ignoring the realities faced by marginalized communities, which are so often different from those faced by white Canadians. In addition to the $19 million, the government has also set aside $23 million over two years, which will help support cross-country consultations concerning the new National Anti-Racism Strategy.

It is vitally important to allocate money to groups of people that have been oppressed for centuries. In Canada, systemic racism and oppression have plagued the Black and Indigenous communities and that legacy continues to this day. That’s why it is so important that employment equity is at the forefront in workplaces across the country.

Employment equity encourages workplaces to be free of barriers and conditions of disadvantage and recognizes that marginalized groups have for a long time experienced systemic racism in relation to employment. It’s also important to have people of colour in positions of power and influence, so that people in marginalized groups can see that they are being represented and feel that they have a person(s) in a position of influence to hopefully make things better for their community.

The colourblindness ideology is not an effective solution for addressing and solving the systemic racism that marginalized groups have faced in Canada for centuries. The spat between Caesar-Chavannes and Bernier highlighted the lack of understanding on this issue and showcased the need for further education and enlightenment for those who believe in it.

One thought on “The Harmful Effects of “Colourblindness” in Politics”